I HAD A DREAM LAST NIGHT...

Sometimes, stories come to us while we're dreaming. This is the synopsis of my recent dream that I'm sure will find its way onto the page.

A young girl has obtained her pilot’s license. She wants to buy her own plane. Thanks to a small inheritance from her recently deceased father, she can afford an aging Cessna 150. The mother was always weak and the daughter always willful.

A plane is found at a price she can afford. Like the girl’s mother, it is a bit worse for wear. The girl suspects the logbook may not accurately show the hours on the engine since it’s last major, but buys it on the spot. She, her mother, and perhaps a friend, take the plane up.

They’re flying over high desert, much like Nevada, although I wasn’t sure where it was. With no flight plan filed, they fly this way and that. The mother is bored and won’t say it, but she wants to get back down on the ground and go home. As they approach a rocky desert mountain range, the plane’s engine begins to miss. It’s troubles increase and power decreases as the girl attempts to gain enough altitude to skim the mountain. She does, just barely, but smoke is now filling the cabin. She sees a dry lake bed ahead and gets ready to make an emergency landing. The radio doesn’t work, of course, but she sees a ragtag settlement of trailers and building surrounding the playa.

As they approach, she notices that the lake bed has small dead trees scattered throughout. She’s committed at this point and can’t turn away. The plane comes down, the gear is ripped off and the 150 comes to rest against one of the larger dead trees. Her mother is bleeding from a small cut to the head, but they’re alive.

Darkness is falling and the desert air is getting cold. The mother is complaining so the girl heads for where she thinks she spotted a building. It looks abandoned with no lights coming from it. She thinks that at least it will be shelter for the night. A flashlight beam comes from behind a canvas flap and illuminates her. The beam aims away and across the playa. Another light goes on and off in a strange series of flashes. A grizzly man slightly older than her father has more questions than answers and is not happy to have them there.

The dream went on…. It turns out that the small town of trailers and shacks are people living off the grid, completely. They’re so far out in nowhere land that they live by their own laws and once you’re there, you never leave. They have no phones, televisions or any idea of current events, nor do they care. Only the elders can leave for supplies and medicine.

The girl guesses that something is up and tries to leave. The others are afraid she will tell the authorities about their encampment and set about to keep her and her mother there, forever. The struggle to escape and the revealing of the encampment's truth is the rest of the story.

I sat down to write the sequel to ALISHA: The Knower, and this is what I found myself typing...

Each of us finds his or her own way in the world.

Our lives are shorter than any of us would choose,

but longer than those who cannot choose.

Alisha stood by the door. She knew what was on the other side. Her hand almost touched the handle. It was stilled in space as if she could choose the destiny that awaited her on the other side. Opportunity was never an option. Choice was a dream believed by the unknowing, and Alisha was a Knower.

Sorry Ernest, but this is my story so I might as well tell it myself. Ernest is a great friend and scribe, but do we really need someone between you and I at this point? I think not. OK, let’s go back to the beginning.

Where she is going with all of this is beyond me. She may be only 'almost' sixteen, but she's my boss when it comes to telling her story. I'm just glad she has allowed me to trans-scribe her words. Ernest

Posted by ERNEST at 2:50 AM No comments:

SHE KNEW. Even before she woke up that morning. She knew it was coming—coming not for her little brother, mother, father or even her grandmother sleeping in the basement. It was coming for her. ‘Knowing’ was something she’d been born with, tried to hide and tried even harder to deny. She knew, plain and simple. She was, after all, a Knower. ‘Almost’ sixteen, she knew whatever was out there was coming for her.

The first of author Ernest McIntyre’s ALISHA Series of novels. 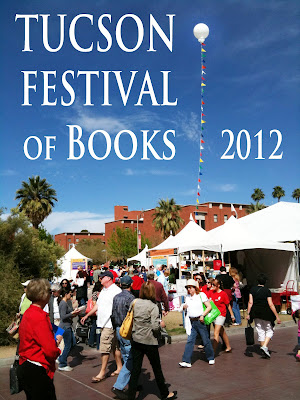 Tucson's Festival of Books was already rated as #4 in the entire country before last weekend's event. In four years it has grown from great to stupendous. It was like Disneyland for writers and readers. More than one workshop had to turn away people who didn't arrive half an hour early.

Personally, I had a wonderful and educational experience at this year's event. I was there from before they opened until after they closed each day. I can't wait to attend the 2013 event. My only advice to the organizers? Double the seating size of your rooms. You needed it this year and next year? Oh boy, will you ever.
Posted by ERNEST at 7:35 AM No comments: 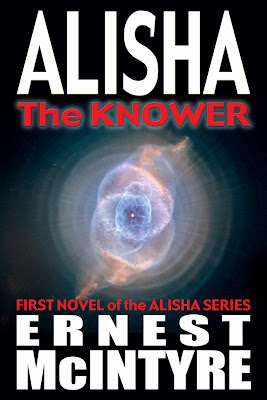 ERNEST
is the author of the ALISHA series, CAFÉ DENIAL, JUNE and other ‘works in progress’. He has been nominated numerous times for the Governor's Arts Award. He has covered the arts in Phoenix for the Arizona Republic newspaper and contributed articles to magazines in the US and abroad. Ernest is also a documentary filmmaker, editor of a magazine, and loves living in the Arizona desert, where he says he is “surrounded by wild creatures and even wilder writers, musicians and artists.”